November 1st, where did October go? Maybe it’s just me but it feels like it flew by! This means it’s time for pumpkin pie, but not just any pumpkin pie Vegan Marshmallow Meringue Pumpkin Pie! Sorry I’m so excited to share this one I couldn’t hold it in. I even shared a sneak on stories of it this past weekend along with another dessert I shared a sneak with last week that will be coming next month. Tis the season!

I don’t even know where to start with this mile high fluffy marshmallow meringue pumpkin pie! The slightly toasted fluffy marshmallow meringue top? The creamy pumpkin pudding pie? Or maybe the pretzel crust that adds a little crunch and balances out the sweetness with a hint of salty pretzels. So much to love it makes you say, mmm. There are actually two layers of marshmallow meringue even though the color difference ended up being lot less drastic then I thought, planned, and hoped. One layer made with regular Dandies Mini Marshmallows and the other Dandies Pumpkin Mini Marshmallows (all natural, vegan). You can use one of each, both the same, or you can use only one if you want a smaller pie or are looking to reduce sugar.

I know you might be thinking pumpkin, you said you weren’t really feeling pumpkin this year. Yes I said that and still not my usual pumpkin crazy self but I do have 2 recipes (as mentioned previously) that I will be sharing and both are desserts. Funny thing, and if you’re a regular reader you might already know this, but I’m also not a pie person. There are a couple reasons but the biggest being I’m not a fan of pie crust or the whipped cream that’s usually piled high. That being said my family likes pie, especially my husband. So you won’t find two things in this pie, standard pie crust or whipped cream. As I mentioned I went with a pretzel pie crust, love my pretzels and my mini me A loves them just as much as her mama. Whipped cream? I didn’t even leave room for whipped cream on top of this pie and who needs it with all the fluffy marshmallow meringue?

When it comes to a Thanksgiving spread you have to have pie, what would it be without pie? I didn’t say Thanksgiving because it’s about more than just the food but when it comes to Thanksgiving food there has to be pie. When it comes to holidays I often have mixed emotions about the food as it wasn’t just cut and dry classics like it use to be growing up. Many families probably have at least one person at their holiday gatherings with either food allergies, sensitivities, or dietary restrictions for whatever reason. Every family handles this differently and it’s usually hard on either or both sides and causes stress. I still remember years ago, almost 12 years ago, I was told I had Celiac and it was just before the holidays. The holidays were not fun. I couldn’t eat my usual favorites and people either didn’t know and didn’t understand or tried to get foods they thought I could eat but many times I still couldn’t or they were ones I didn’t care for or eat gluten free or not. Even though the diagnoses was changed 8ish years ago I’m still aware. I know when I host Christmas I try to make sure I have something for everyone and make it enjoyable for all. The same time when it comes to things like class parties that I’m in charge of for the girls schools I like to make sure all the kids are included and can have the same thing which is usually possible with just small tweaks or considerations. It makes them feel better than sitting at a table with a different treat or not doing an activity. While my family doesn’t have any allergies my oldest does have a sensitivity and intolerance (same as her mama) that we just learned about and dietary restrictions.

Long story short with a couple tweaks this pie is dairy free, gluten free, egg free, nut free, and vegan. The crust can be made with gluten free pretzels as we did since Quinn Sea Salt Pretzels are a fav and just happen to be gluten free. Instead of butter in the crust I use coconut oil or vegan butter. I will add in the notes but I also use coconut palm sugar as it is a healthier sugar option and I like the flavor it adds, you can sub cane sugar for the crust and brown sugar in the pie filling. For the pumpkin pie filling again I used coconut palm sugar and used dairy free milk. I tested with a couple of milks, a standard nut milk I like Cashew Milk, you can use coconut milk, or for a little protein boost Ripple Plant based Protein Milk. Use what you have, if you don’t have dairy free milk and want to make this it’s a great time to try one out and I would recommend the two mentioned both you can find at Target. Now the marshmallow meringue fluff… this one might have you curious. Well I used all natural vegan Dandies Mini Marshmallows, two flavors but you an use one or both. How did I turn this into meringue that is egg free and vegan? Aquafab! What’s that, basically stated it’s the liquid from a can of chickpeas. Yep a regular can of chickpeas. This also means you’ll have chickpeas to use, umm hello hummus time! If you aren’t a fan of hummus (have you tried my Cacao Hummus) blend up a smoothie, yes a smoothie! I have a couple Funfetti No Cake Protein Smoothie Bowl, Healthy Cookie Dough Smoothie Bowl, and an Everlasting Joy Smoothie Bowl. Or you can just make chickpea cookie dough or my Healthy Cookie Dough Brownies. I guess if you aren’t feeling anything, and already checked Pinterest, and really hate chickpeas you can throw them but check I bet you may have a hummus loving friend that would gladly take them off your hand.

The holidays are meant to be enjoyed don’t forget what they’re really about. Spend time with family and friends, give yourself a break and try to relax and not take on too much (I need to take my own advise on this one), and when it comes to food enjoy it! Yes enjoy each and every bite, if you want it have it, one day or piece of pie, is not going to ruin anything or be the end of the world. This Vegan Marshmallow Meringue Pumpkin Pie is sure to be enjoyed by not only you but family and friends! Then bonus watch their faces when you tell them it was made with aquafab (if you want them to Google) or chickpea liquid. Yep I did that after the mmms and ahhs from my family! 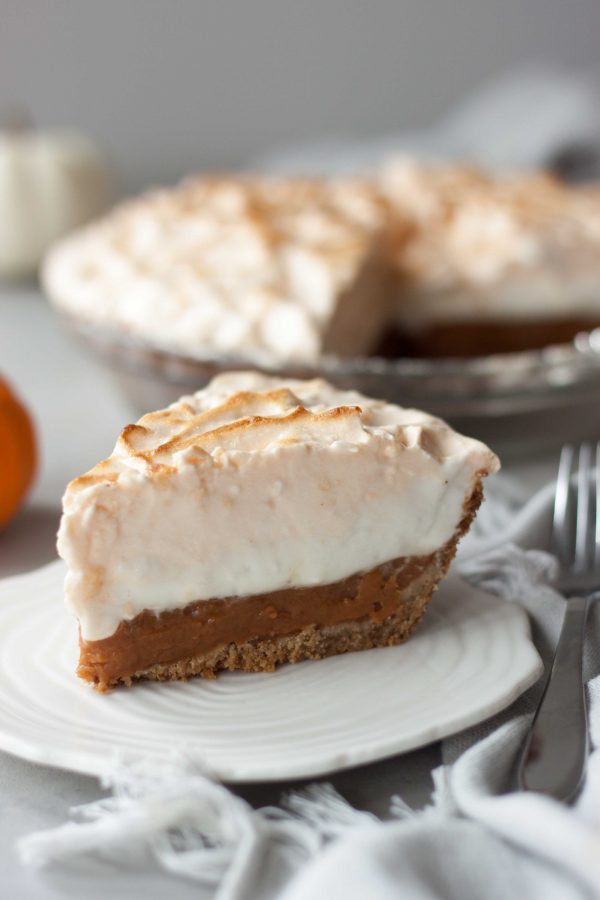 *Out of milks tested with these are my favorites.
Feel free to reduce Marshmallow Meringue by half for a less fun pie. You will want to only go half way up the sides of your pie pan with the crust if doing so.

Marshmallow Meringue adapted from Dandies Marshmallow Fluff, adding in cream of tartar for stabilization and baking to toast and set meringue.

Such a perfect recipe for Thanksgiving! Love this take on a classic!
Jessica @Small Bites by Jessica recently posted…Menu Plan Monday: October 23, 2017

So this is amazing and you are amazing for creating it! I’m adding this to my holiday menu for sureeee. Thank you so much for making this!

So the secret is aquafab! I was wondering how you made such a light and fluffy meringue. I don’t like the egg white meringues, but I think I would love it made with marshmallows. I can’t wait to try this out.
Amanda recently posted…Gluten Free Brownie Cups

ooooh, DANG – every part of this sounds amazing! I LOVE how high the meringue is! 🙂

You had me at marshmallow. Mmmmm. Looks mouth-watering. Can’t wait to try it!
Jane Murguia recently posted…Matched betting for full time Mums – this is NOT gambling!

Now this is some serious mile-high deliciousness! I have to admit that I haven’t been a fan of aquafaba meringue, but the addition of vegan marshmallows must make it perfect and add some necessary substance. So smart!
Alisa Fleming recently posted…Moo-ve Over Millennials, Generation Z is Going Dairy Free

This looks and sounds amazing!