Ever heard of Kitchari? I hadn’t either until a couple years ago when I first came across it in a cookbook (Superfood Soups) and loving all things turmeric I had to give it a try. It did require picking up a couple ingredients but I’m so happy I picked them up because it was love at first bite and has been a staple every since. I haven’t shared it here, I’ve shared it with family and friends, until now because there are so many recipes out there but so often I talk about it and then I get messages or phone calls about it because there are so many recipes out there.

There are so many recipes out there. Think of it as you would chili, everyone has their favorites and then there are those of us that switch it up all the time almost never making the same exact batch. So while I do change it up often I will add notes in the recipe and go through a few of them here, as well as ways to make it easier or for less money.

If you’re already looking at it and thinking soup season is over this is far from a seasonal soup. I make it year round and in the summer it’s especially great to make with all the produce from our garden, which is also another reason why I’m always switching things up!

First what is Kitchari?
Kitchari (pronounced kich-uh-ree) is the traditional cleansing food of Ayurveda. It means mixture, usually of two grains rice and mung dal (or yellow split peas). Kitchari is nourishing and easy to digest and packed with whole food nutrition giving strength and vitality. It’s used to balance the body and also support recovery from illness or physical stress. You can read more about kitchari, Ayurveda, and cleansing (for the body and mind) programs that use it like panchakarma. While you might thing this is just for dinner it’s served for breakfast and lunch as well.

I fell in love with it as it tastes good and is very comforting yet not heavy and just makes me feel good. I just recently started learning more about Ayurveda, but only small pieces. It along with finding balance in my life hasn’t been a priority like I had hoped and planned this year. I have my barre so yoga has taken a back burner, although I was adding it in with my oldest. Relaxing, reading, reducing stress, it’s all very hard as a mom and as much as I try to make it a priority always put my family first and then feel like I’m always catching up with the blog and everything else that goes with it. Have any tips other than say NO, let me know.

As I mentioned I had to buy a few things. If you don’t have the herbs and spices you will need those but they are relatively inexpensive and can be purchased anywhere in the seasoning section. You can even pick up small amounts in the bulk section of some stores. I use to use yellow split peas making this and could easily find them in the bulk section or in a bag but lately many stores haven’t been carrying them, even Whole Foods removed them from the bulk section at my local store but I haven’t checked others. Recently I found moong dal which is a smaller version in the Indian food section at my local Hy-Vee when I went to see if there bulk section had it. The family actually liked it better as it was much softer in texture. I got a large bag for less than $5, which will make a dozen batches of kitchari if I didn’t use it for other things. It’s called many names mung dal, moong dal, yellow split peas, and a number of brands including Bob’s Red Mill that carry it. Also check your ethnic food section. As mentioned I recently bought a big bag and being high in protein I plan to play with it more in the kitchen for other recipes. Kombu is a seaweed and can be purchased at Whole Foods or if you are in another store looking for it it’s usually in the Asian food section, or you can purchase on Amazon Prime. Kombu is optional but I like it for all the minerals it adds and I use it in many broths and soups. It is dried seaweed so you can keep it in the cupboard and costs less than $5.

So if you had to buy everything, including the optional kombu, it may cost around $10 but you will be getting a number of batches or can use these shelf stable goods in many other ways. All of the seasonings minus fennel (you can grind your own if you have seeds) are ones I use to make pickles in the summer.

Everything else are pretty much staples in our kitchen. Coconut oil, turmeric, ginger, rice, water, and vegetables. Kitchari is traditionally made with basmati rice. I use to make it with a sprouted brown rice mixture but have been making it with brown basmati rice. As I mentioned there are so many versions and variations, some with more rice than mung dal (yellow split peas) and some the other way around. I usually go more rice as that’s what I started with and what the family likes but you can play around or even go half and half (3/4 cup each). Also most of the traditional variations I’ve seen are made with ghee, I use coconut oil. The other variations come with how thick they are, most being like a porridge, and what vegetables are used in them. I think the general “rule” I’ve seen is 2-6 cups of additional vegetables can be used.

I always use cauliflower and have tried cauliflower rice before but I wasn’t a fan so I usually just stick a head of cauliflower and shave the florets off and then use the remaining for ricing for smoothies or another dish. I noted the amounts but I use a whole head. I also always use carrots, usually 2-3. I used butternut squash this time and it’s what I usually use but I have also made it with other squash and sweet potatoes. When we have squash in the garden I use that. If you want to make it quick and easy you can buy already cut up butternut squash. I usually get a whole small squash unless they are by the pound and it costs more than already buying the chopped squash cubes. The only thing we weren’t fans of is making it with zucchini, it was too mushy and watery. Then greens added at the end, to make it easy I used a power greens blend but when we have the garden I usually use rainbow chard adding stocks (chopped) in with the other vegetables and then rough chopping the leaves and adding in at the end. Sometimes I use baby kale, not to be confused with other kale which is much tougher. If using a bunch of greens you will want to remove steams and cook those with the other veggies and chop the leafy parts and add at the end.

When it’s summer I also have pretty nasturtiums to add to the top as they are edible flowers and make me smile. This is back when I was adding too much water, a different rice, and yellow split peas which don’t break down as much as mung dal/moong dal. Still delicious but we’re our newer versions.

Oh and if you happen to have chaga, which I haven’t had on hand recently so I’ve been using Four Sigmatic Superfood Blends (10 mushroom blend) that includes chaga, reishi, cordyceps, Lion’s mane, shitake, and a number of other mushrooms. Since the girl don’t need this and aren’t fans when I had added it to some leftovers I just sprinkle it on top of mine for an added nutritional boost.

Rain, snow, or sunshine kitchari is a year round soup that makes me and my tummy happy!

Print Recipe
Kitchari
A comforting and nourishing blend of rice, yellow split peas (or mung dal), spices including turmeric, vegetables, and greens. Plantbased, gluten free, vegan, with superfood boosts. Kitchari (pronounced kich-uh-ree) is the traditional cleansing food of Ayurveda. It means mixture, usually of two grains rice and mung dal (or yellow split peas). Kitchari is nourishing and easy to digest and packed with whole food nutrition giving strength and vitality. It's used to balance the body and also support recovery from illness or physical stress. 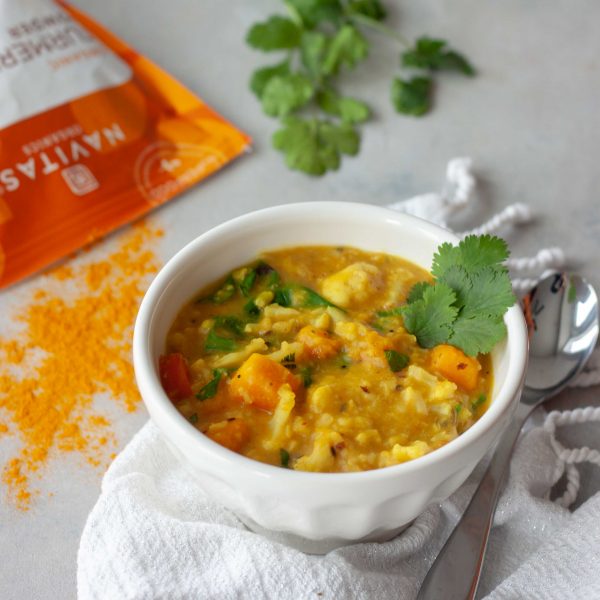 Feel free to adjust amounts of vegetables or try other vegetables.

If using other vegetables (or less), rice, or adjusting rice/mung dal start with 6 cups of water and adjust as needed. Over the years we have come to like it thicker as shown in this recipe and like traditional kitchari (a thick poridge like consistancy rather than a soup).

you know I am all over this! I love dal and all of the seasonings in this meal. Delicious and healthy!
Deborah @ Confessions of mother runner recently posted…4 Weeks To A Sprint Triathlon

I’ve never had kitchari but it looks + sounds super good, especially since spring apparently hasn’t gotten the memo yet!

Such great information and yummy recipe! I’m pinning this to try when I get back from vacation! I’m sure it will still be frigid in CT so this will be perfect to warm up.