Happy Meatless Monday, I hope you all had a great weekend! The weather here was hot and in the 90s which isn’t normal for this time of year so we loaded things up and played at the lake with friends all weekend taking advantage of the beautiful weather.

It was an amazing weekend starting Friday when we shared the gender of “Baby Mic Drop” until we pulled the kids off the lake and came home last night. As we were packing up I got a tickle in my throat and by the time I got home a terrible headache and start a cold that got so bad I couldn’t stand to finish up the post I had planned for today. So I’m sharing this Cast Iron Apple Crisp I posted last year that I was bummed I couldn’t make this past weekend as I forgot a few things packing.

My obsession with apples is nothing new but the love is even stronger this year. Apple Crisp is a favorite and lately I’ve been making a fake out mixing chopped apple, a little yogurt, and a butterscotch granola with pecans. I let it sit to soften the granola and then add a little more. It’s a go to breakfast or snack.

I will be making this easy and healthy Cast Iron Apple Crisp this week and again after going to the apple orchard this weekend.

I will get the post that was planned for today up this week so there will be a new recipe, Oatmeal Pancakes that I posted a version of last weekend on Instagram that people have been asking for the recipe for.

Today is Meatless Monday and I look forward to seeing what’s happening in your kitchen and hope you link up with me and my co-host Deborah and share! I also hope you check out and are inspired by the recipes linked up below.

Originally post from last year when fall hit, the opposite of the weather we had over the weekend but it’s suppose to get chilly this week.

Fall has really hit this week, we woke up to frost and chilly temps yesterday and I was baking just to warm the house up. Yes that is my story and I’m sticking to it. I think that is why baking is in full swing when fall hits and one of my favorites is apple crisp. It’s one of the first things I make after we go to the apple orchard, usually the night after we spend the day there because I just can’t wait. This Cast Iron Apple Crisp is so easy it’s been on repeat because there is no reason not to make it. It’s a healthier version than the apple crisp I grew up on and while I would say there are some comfort food classics you can’t mess with because they don’t compare this one it one that is so good healthy or not you’ll want to make it again and again.

I know my grandma would definitely approve of this recipe, I know because we made a slightly different version last fall and brought it to her and I won’t forget that smile on her face. It will probably pop up on my Facebook memories feed any day now. Anyone else love that feature? I get the biggest smile because at least once a week photos of my grandmother pop up since the girls and I would see her weekly. Last week it was 6 years ago A and her having mac n cheese at Noodles together. The week before photos of the girls and her and a big debate over who was going to buy grandma her first PSL at Starbucks 4-5 years ago.

When it comes to apple crisp I’m all about the crunchy topping and that ratio of apples. It also has to be a good crumble with texture and nut just soft or crunchy sugar, not like a streusel topping. I’m very particular about my apple crisp. I remember my mom making it and enjoying it for dessert and turning around to have it the next mornings because hey it’s apples and oats, well she made hers with some oats, so it’s technically I could just call it oatmeal right? Don’t try to convince me otherwise because I could justify it all day long growing up. Since I make my Cast Iron Apple Crisp with muesli it’s even more justification to have it for breakfast. Oh and dessert too, but for dessert topped with a big scoop of vanilla bean ice cream!

I’m getting so exciting sitting here at A’s gymnastics writing up the recipe that I want to run home and make a batch for dessert tonight. So easy it’s totally doable even while making dinner. The house would be smelled with amazing smells, we could have warm apple crisp tonight and I’d stash a little away for tomorrow morning. It doesn’t get any sweeter! While I usually love pumpkin, and as my oldest daughter would say I get a little pumpkin obsessed, I’m really not feeling it this year. Crazy I know and don’t get me wrong I still like pumpkin but I’m craving all the apple, cinnamon, caramel, vanilla, and squash things this year. Shocking not only my girls but myself. Yes I posted Salted Peanut Chocolate Pumpkin Cheesecake Bars, Pumpkin Pie Overnight Oats Smoothie Bowl, my Warm Pumpkin Salad with Apple Cider Tahining Dressing (which can also be made with butternut squash) Monday, I have one pumpkin recipe posting next week and a pie posting soon but other than that I think that’s all the pumpkin I will be posting. That’s not a lot at all compared to previous years.

What makes this recipe so easy and how did I make it healthier? Well starting with my favorite local Minnesota made muesli (don’t worry it’s at Target, Whole Foods, and a lot of places nationwide) which is packed with oats, seeds, nuts, and dried fruit. No added sugar! Simple healthy ingredients and the Bircher Apple Cinnamon Muesli is vegan as I think it’s the only flavor not made with honey and like all of their muesli gluten free! Mix that with just a 1/4 cup of flour, cinnamon, pure maple syrup, and coconut oil for the crumble! For the apples you cook those in the pan with just a little coconut oil, add in cinnamon, lemon juice, and a couple tablespoons of maple syrup. Sprinkle the muesli crumble on top, and throw it in the oven. Yes quick, easy, healthier, and minimal mess! For non veganyou can sub honey and if you want and there is an option to sub vanilla bean ghee for half the coconut oil for richer flavor.

Pull it out of the oven and enjoy it warm, or let it cool but don’t forget to add a scoop of vanilla ice cream on top! Ok technically that is optional but really is it an option? Yes I would eat it without but do I really want to…. I’m not sure. Yeah I think I really want to add the ice cream because as simple as it is I’m craving Vanilla Bean Nada Moo (dairy free, vegan) ice cream lately and this is just another reason to enjoy it.

Now that it’s baking season, what is your favorite fall baked good to make? 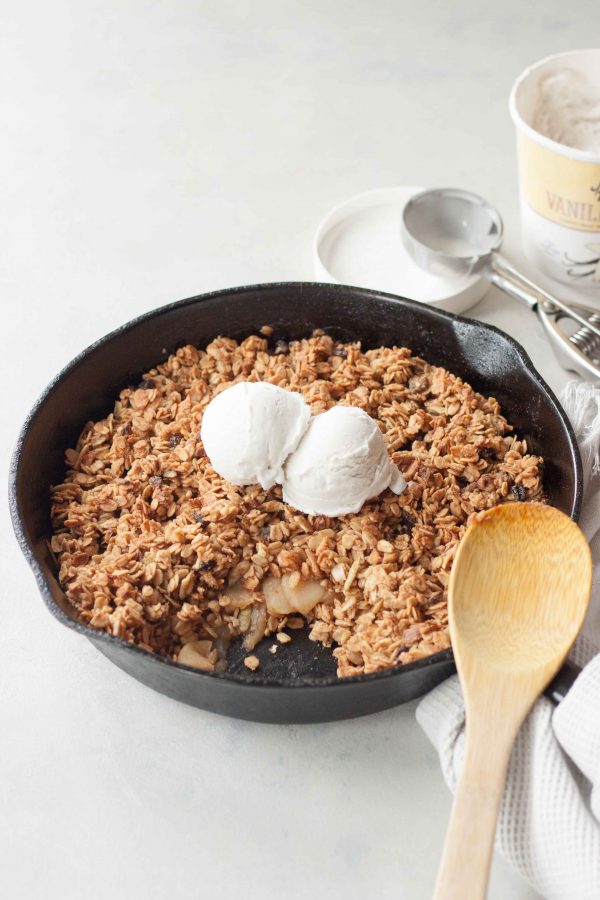 Or sub half butter, vegan butter, or ghee (Vanilla Bean Ghee) for half of the coconut oil for the 1/4c cup.
Also tested with whole wheat white flour.
Local Seven Sundays Bircher Apple Cinnamon Muesli is gluten free, no sugar added, and vegan by ingredients.

I love the smell of baked apples! Using a cast iron is a great idea
Deborah @ Confessions of mother runner recently posted…How A One Mile Treadmill Run Can Improve Your Running

Oh man, this sounds so good. I shouldn’t have looked at this today, now I need to bake to warm up the house..lol. It’s slowly getting chillier here too, bring on all the baking!!
Deryn | Running on Real Food recently posted…Curried Roasted Cauliflower Salad

I love that you can make this while making dinner too! Great recipe Sarah! I need to add this to my menu soon!
Liz recently posted…Comment on Maple Sunflower Seed Dessert Dip – Tree Nut, Peanut & Gluten Free by amanda -runtothefinish

I love that you found muesli with no added sugars! This looks delicious! I love it!

Just recently got a new cast iron skillet, now I know what to use it for 🙂
Maria recently posted…How To Tackle Your Gut Issues

i dont make crisps very often but apple crisps + vanilla ice cream is easily one of my fav this time of the year.
dixya @food, pleasure, and health recently posted…Spider Pizza Bites

can you believe I still don’t have a cast iron skillet! I know they add great flavor, so I really need to get one!

Apple Crisp is my favorite dessert! Your recipes lately are really making me think I need to finally get a cast iron skillet, too 🙂
Alisa Fleming recently posted…The Big List of Ghoulishly Good Dairy-Free Halloween Recipes

This looks fabulous! I’ve been using my cast iron skillet a lot lately but have yet to try a dessert in it! I have some apples on hand though and will have to try this over the weekend!
Whitney @ To Live & Diet in L.A. recently posted…Vegan Pesto Pasta Primavera

We got a cast iron skillet a year ago and we’ve only made dessert in a couple of times. This crisp is next!

I love that crisp oatmeal topping! It looks delicious.

this sounds incredible! I have nearly everything to make this… happening SOON!

Why have I not purchased a cast iron skillet yet?! Ugh!

I am obsessed with my cast iron skillet and am always looking for new recipes for it! I make a really yummy peach and blueberry crisp in it, but didn’t have a good apple crisp recipe – can’t wait to try yours!!

Skillet pies are perfect for the fall! We do a lot with berries but I’ll have to bring out the apples since that’s my husband’s favorite.
Nicole Dawson recently posted…Allergy-free Halloween + Giveaway

What a yummy fall inspired recipe! Now we need actual fall temps to go along

That is one good looking apple crisp! I get apple obsessed as well come apple time!