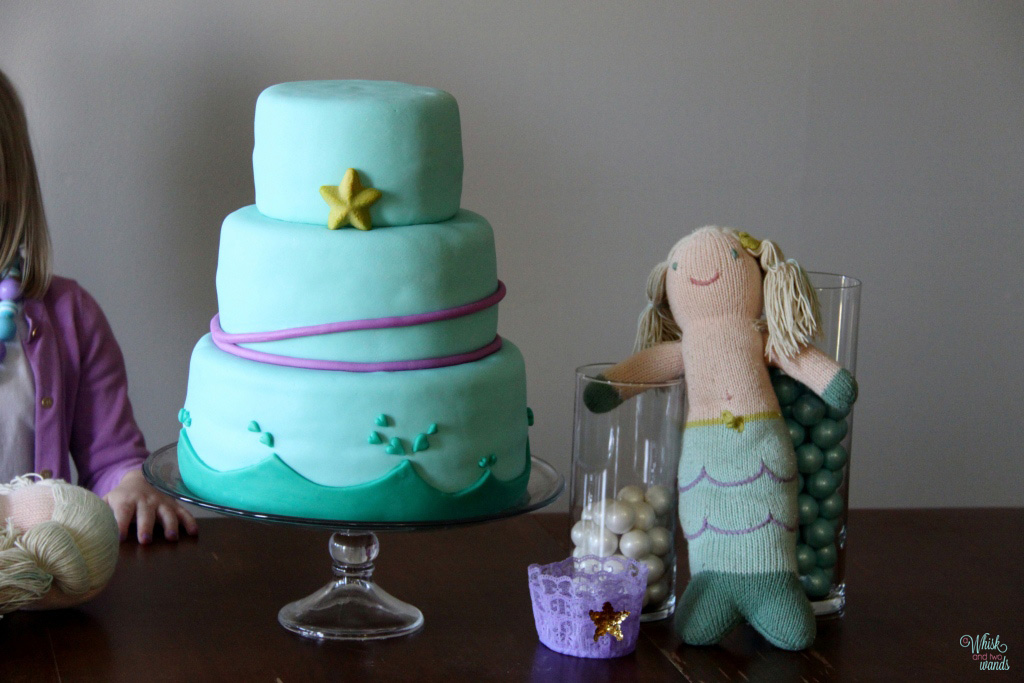 My youngest daughter just had her 5th birthday and had a Blabla Harmony Mermaid theme. Her only request was she “just” wanted “veggies and fruits like a coral reef.” We had already sat down and decided on her cake and I thought I would have my hands full with that and wasn’t really sure about the coral reef. A few days before her birthday I decided what the heck if that is what she wanted that is what I would attempt since we were just having light snacks and the cake for the party. She was so happy I made it and everyone really enjoyed it! Honestly it didn’t take me very long to do and below I will go through some tips, what I used, and how to make one yourself. For her cake she wanted a tiered cake that was a white vanilla filled with blueberry buttercream filling and covered in marshmallow fondant. 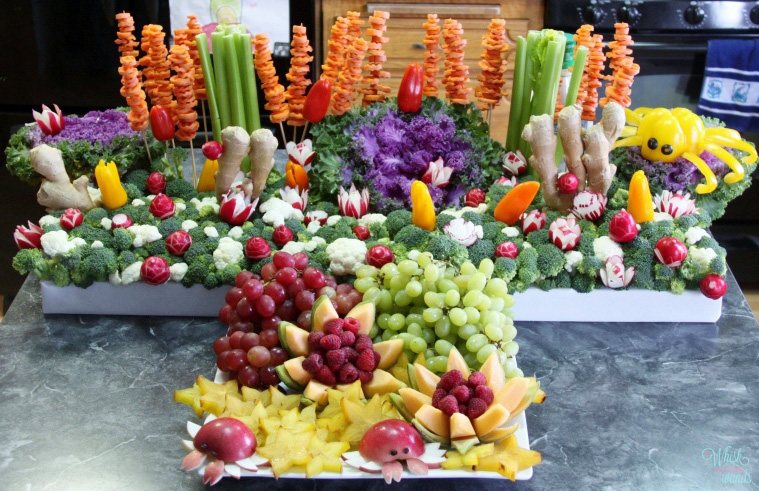 For the coral reef I decided to separate the fruits and veggies with a bigger emphasis on the veggies as there would be the cake that was already sweet. 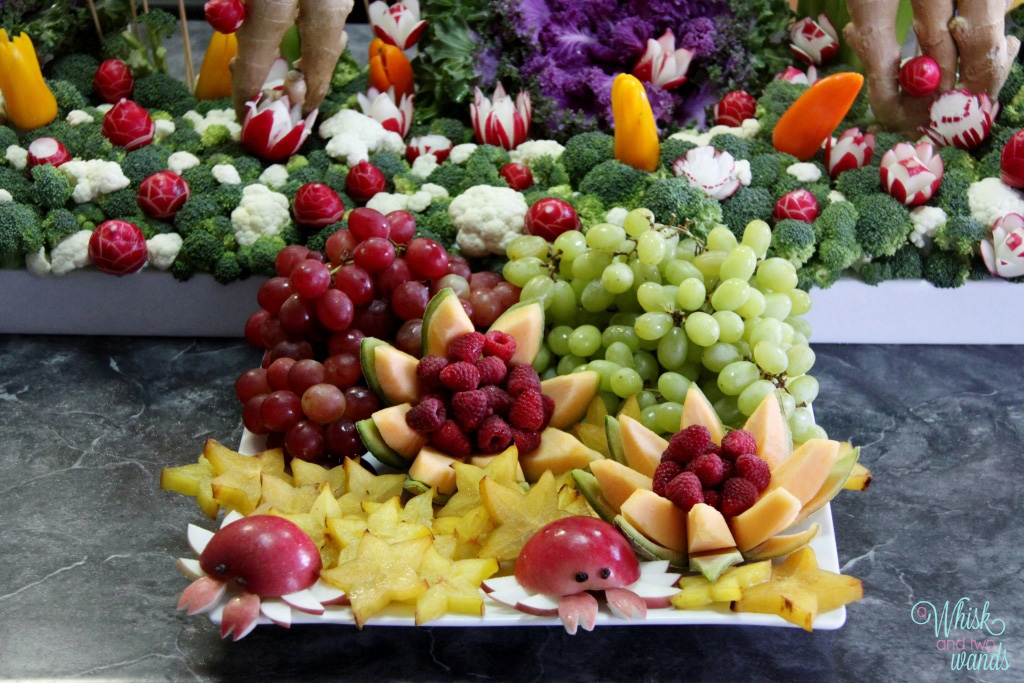 For the fruits I took I used a 20×20 platter and started by piling on two big piles of grapes 2-3lbs each red and green. I cut a cantaloupe in half and cleaned out the inside and using a curved bird’s beak paring knife, I cut 8 petals into each cantaloupe half, carved down the inside at an angle to make it less block like, and separated the peel. You can also YouTube fruit carving to see different ways to carve the cantaloupe into flowers. I than filled the flower halves with a pint and a half of fresh raspberries. I then sliced 3 star fruit, removed the seeds, and placed the slices on the platter. Last I cut out the crab apples. I used 2 apples and cut off a section just off to the side of the seeds to use as the body, cut 8 thin slices for each crab (4 legs per side), and again using my bird’s beak paring knife carved out pinchers out of a 1/8th of an apple slice. So each apple will make one crab and there was a little leftover, that trust me didn’t go to waste. I soaked the apple in some water with fresh lemon juice to prevent browning and assembled the crab. I attached dried currants for eyes with the ends of toothpicks. If it was for a lunch or snack for my girls I would have attached the currants with yogurt or peanut butter but didn’t want them to fall off if bumped. 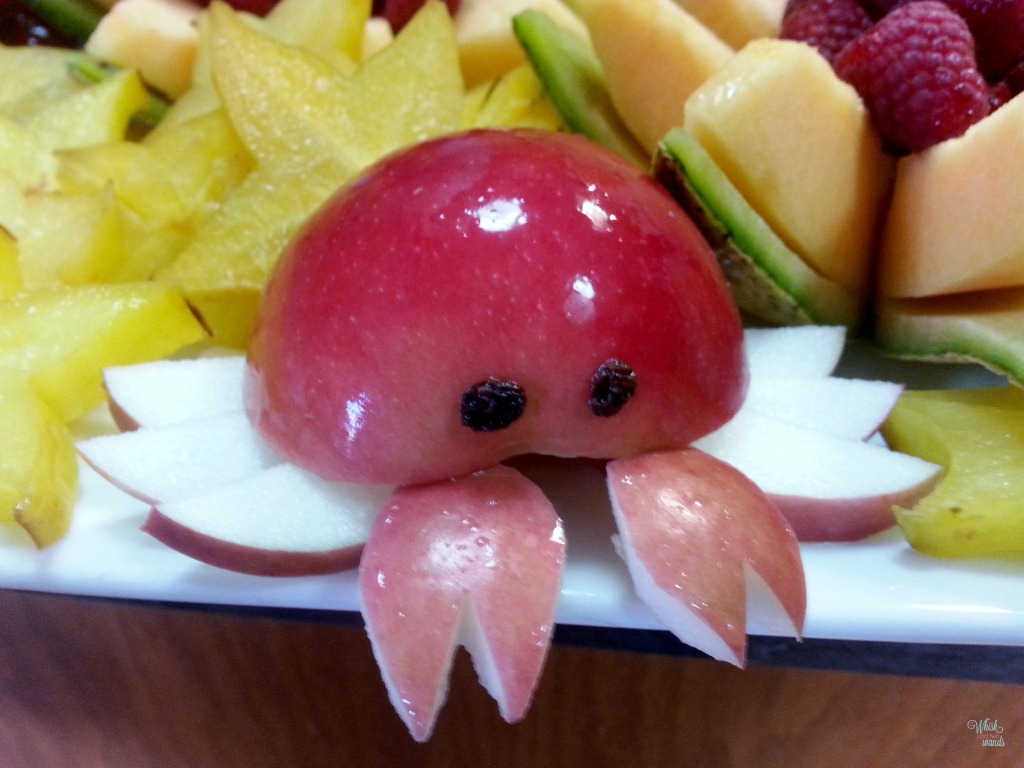 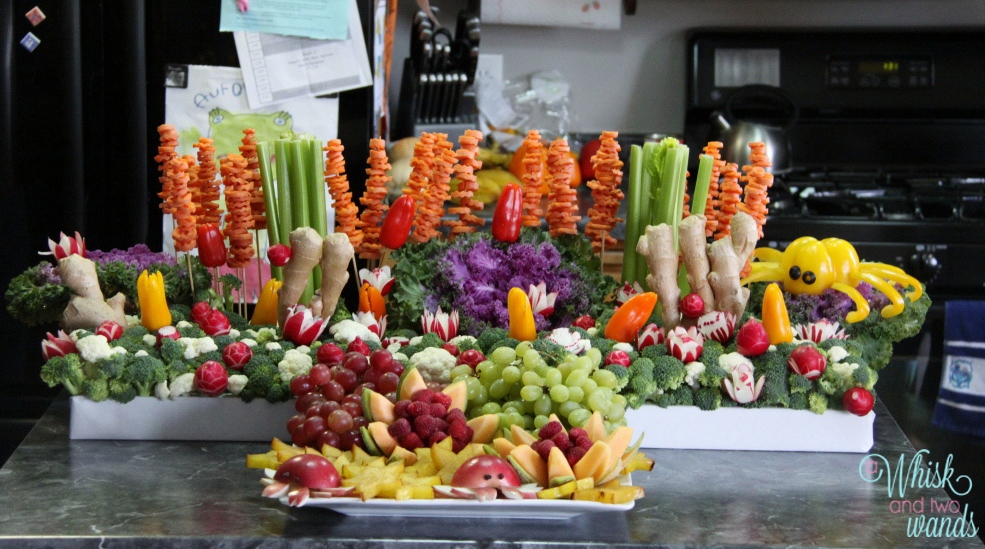 For the veggies I started out with a 3′ long x1 1/2′ wide  x 3″ high foam board covered in butcher paper (thick paper, waxed coated on one side). You will need bamboo skewers, toothpicks, and a lot of veggies. I assembled the carrot sticks and radishes the night before. For the carrots I used a wave vegetable cutter and sliced the carrots (used a few pounds) into slices. You want to make them thick but not too thick that they crack when putting them on skewers. I offset the carrots when putting them on the skewers to give them extra dimension. Bag carrots and store in the refrigerator until assembling. For the radishes I cut them into different shapes using my bird’s beak paring knife. There are a lot of different flower options, my husband and I both carved out 4 bunches of radishes while making dinner. Place the radishes in a bowl of ice water in the refrigerator overnight and they will open up. An hour before the party I assembled the coral reef. First I made the pepper octopus using 2 bell peppers. Cut the top off one pepper and clean out the insides, this will be the head. Next take another pepper, cut in half lengthwise and clean out the seeds. Cut 8 slices for legs, you can save the rest of the pepper for another time or give it to the kids to snack on while you are assembling the reef. If you are laying the octopus on a platter you can just place the legs next to the body, if you are putting it on top of something you can use toothpick halves to attach the legs to the body. Place two black olive slices on the pepper with humus or toothpicks for eyes. I placed the heads of purple kale on the board using toothpicks. Added the carrot skewers by pushing the skewers into the foam in the back for height along with 2 celery stalks with 2 toothpicks each. Next cover the board with broccoli and cauliflower florets using toothpicks, I used 2lb of cauliflower florets and 3lb of broccoli florets. For the small ones we left those until the end and just place those where needed not using toothpicks. Add in a couple of hunks of ginger root with toothpicks for coral. I took a few mini sweet peppers and cut from the tip down about 3/4 to create petals and placed those on skewers for the taller ones, toothpicks for the smaller ones to make flowers. Add radish flowers using toothpicks onto kale, ginger, ground, anywhere you wish. Place the octopus on the kale or where you wish and you have your vegetable coral reef! 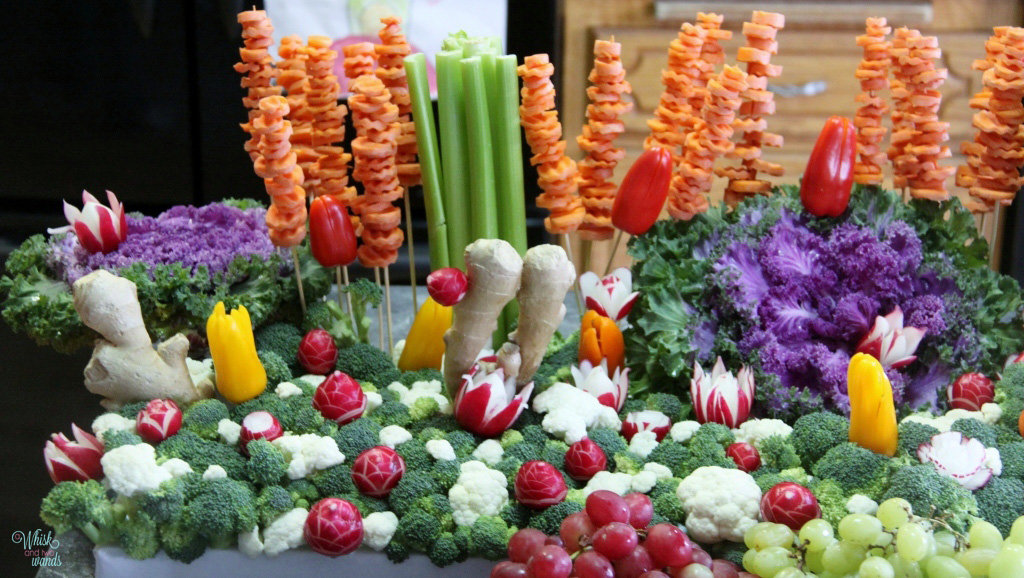 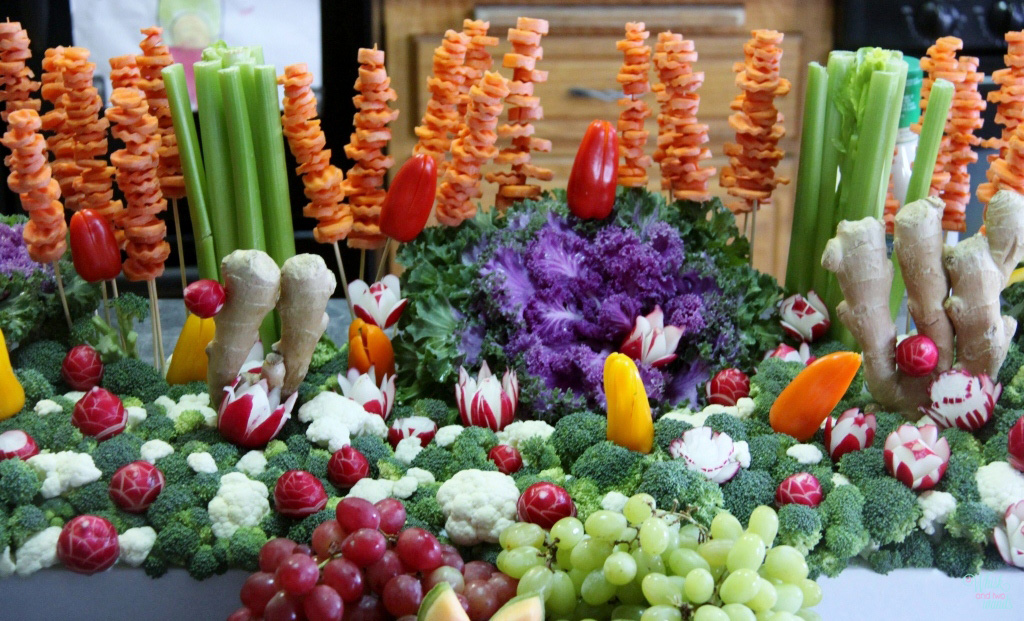 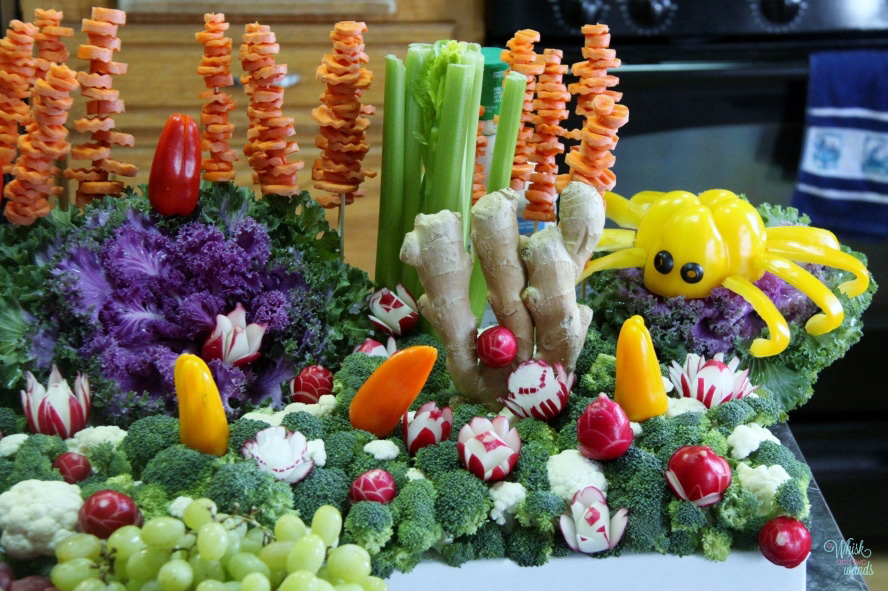 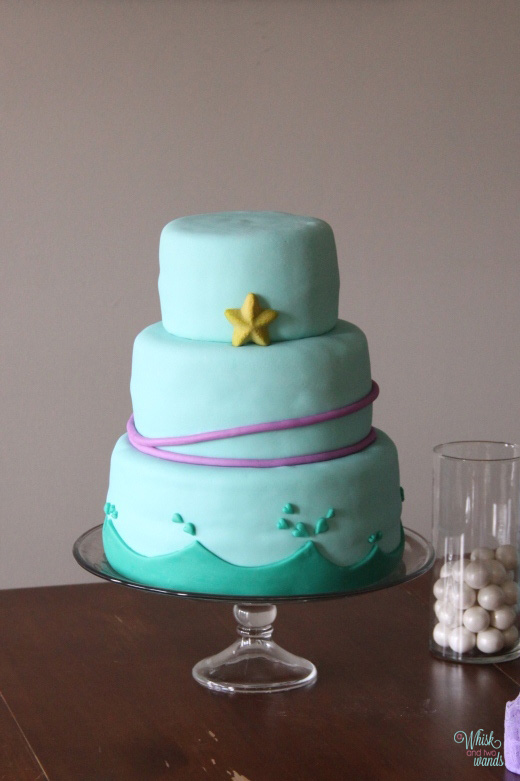 Now onto the cake! I love making cakes and cookies and it may be one of the only things I look forward to as my girls get older, I really wish they didn’t grow up so fast! The birthday girl wanted a tiered cake that was a white vanilla filled with blueberry buttercream filling and covered in marshmallow fondant. I prepare the marshmallow fondant a couple days ahead of time. I can’t remember what recipe I used years back but it is basically the same as this one, fondant recipe, making 3 batches and there was extras leftover but I always make extra just in case. In the past I also made a version with corn syrup but switched to not using it and while I did like the other slightly better this version works great as well and is what I have been using. I added a little vanilla to this one but will use other flavors as well depending on the cake and filling flavors. I made the starfish out of white chocolate using a mold, tinted lime green, and after it was set melted it slightly and sprinkled with edible gold dust. I baked two 10″ round, two 8″ round, and two 6″ round white vanilla cakes. You can use your favorite recipe or if want to use a box mix my only suggestion would be follow the box directions but instead of using oil use that same amount of unsalted butter and add an extra egg. For the 10″ and 8″ I use bake even strips to prevent browning on the outside, cracking, and high centers. For the filling we used about 3/4 of a batch of buttercream mixed with 2 jars of Crofter’s Organic Blueberry Jam and an additional 1 1/4 batches to dirty ice the cake before adding the fondant. I made the wave, hearts, and rope the night before. I assembled the cake the night before the party. 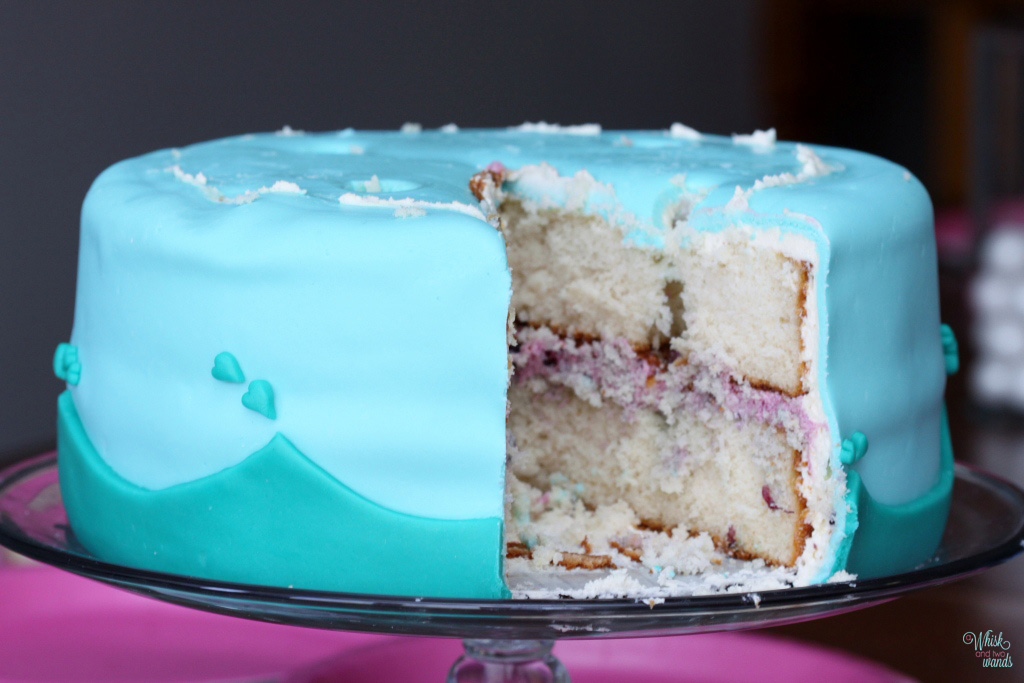 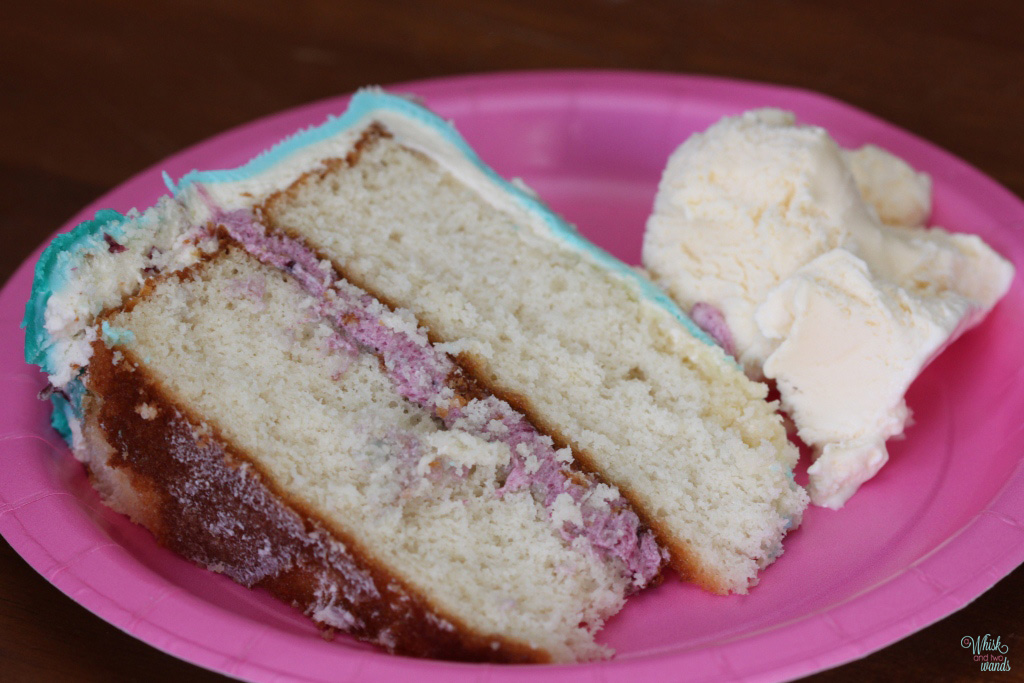 What is your favorite birthday cake? What do you look forward to most about your birthday or your children’s birthday?

Wow! This is truly beautiful! What a lucky little 5 year old 🙂 I have two daughters, too, so planning their parties were always so much fun! One of my favorites was an “archaeological dig” that we had in the sand pit out in our yard…my 8 year old was really into Egyptian history. Go figure. We hid various “Egyptian” artifacts and gave the guests little shovels. The cake was King Tut. It was one of the ugliest cakes I’ve ever made!

Thank you! I look forward to doing their parties! My oldest just decided not to have a party for her birthday next month and to go out for a fun day with friends instead. I am going to miss the party planning but still plan on making her a cake. An archaeological party sounds fun!! I liked non-traditional, or themes you don’t see everyday! Oh I can imagine doing the black frosting… I hate doing black frosting.

[…] and easy option.  For an extra challenge, you could transform a fruit and vegetable platter into a coral reef that just might be too beautiful to […]