Bananas have been one of my biggest pregnancy cravings as I have previously mentioned and not just caramelized bananas. Before getting pregnant I would rarely eat a raw banana unless it was on pancakes, waffles, or in a pb&j. I was over bananas in smoothies and 98% of the time only at them when they were caramelized. That changed with pregnancy and especially later during my 2nd trimester.

Give me all the bananas! In bowls of cereal, yes cereal, or hey even mini Nutter Butter Cookies (still mad my friend introduced me to those), on pancakes, and don’t even get me started on banana bread. I make at least 2 loaves of banana bread a week lately. In case you missed it National Banana Bread Day was a couple days ago but if you ask me it doesn’t need a special day. I also have a couple banana bread recipes, or variations, coming as I’ve been making and freezing batches for when Baby G arrives.

This coming Saturday, March 2nd, is National Banana Cream Pie Day! I already know what I’ll be making to celebrate that day…. Banana Cream Pie French Toast! Until then I’m going to enjoy something a little healthier but just as delicious and satisfying. Banana Cream Pie Chia Pudding is so easy to make and is a great grab and go breakfast option, afternoon snack, or even a healthy dessert. The basic banana cream chia pudding takes only a couple minutes to prepare. Just stir a couple basic ingredients together and let sit for at least 2 hours, overnight is better, and you can prep it up to 2 days in advance (just don’t add the bananas until just before).

The fun part is the toppings! You can go simple with your grab and go breakfast and just top with fresh banana slices. For snack or dessert you can top with warm caramelized bananas or brûlée bananas, both take it to another level of deliciousness!

Still haven’t tried chia pudding? If a delicious recipe like this one doesn’t have you jumping up to try it. Maybe this will. Chia seeds, will keep you full it’s a high in fiber and a rich source of B vitamins, vitamin C, vitamin E and the essential minerals iron, selenium, sodium, calcium, magnesium and phosphorus. Chia Seeds are loaded with omega fats, protein, antioxidants and fiber. They are a great source of healthy essential fatty acids, eight times more than salmon! They’re also one of the most digestible plant proteins.

If Baby (boy) G decides to come this Saturday it’s also S’s best friends birthday and she’s brining a banana cream pie up to the hospital. I’m hoping he stays put another couple weeks and I plan on making Banana Cream Pie French Toast, or Corn Flake Crusted Banana Brûlée French Toast! I shared a photo 2 weeks ago when we went on a little Babymoon before baby arrives. It was also kind of an early anniversary get away as our anniversary is in March. We went to a hockey game, dinner, and stayed downtown St. Paul in a historic hotel where I had the best French toast of my life, Cornflake Crusted Banana Brûlée French Toast, and I shared a photo on Instagram (the only time I got on social media over the long weekend). Not sure if I’ll add the cornflakes or just go with a simpler version using sourdough. I guess it will come down to if I pick up cornflakes and if I make sourdough or buy bread this week. Either way I’ll share it on Instagram this weekend.

If you love caramelized bananas and don’t have a kitchen torch I highly recommend picking one up, only around $10 on Amazon and you can not only make brûlée bananas in seconds but toast marshmallows. You can also brûlée sugar on anything including grapefruit. I’m just stuck on bananas right now, like bananas for bananas!

I hope join my co-host Deborah and I and check out one of the recipes linked up below. We always look forward to seeing all of your exciting recipes and hope you join us. 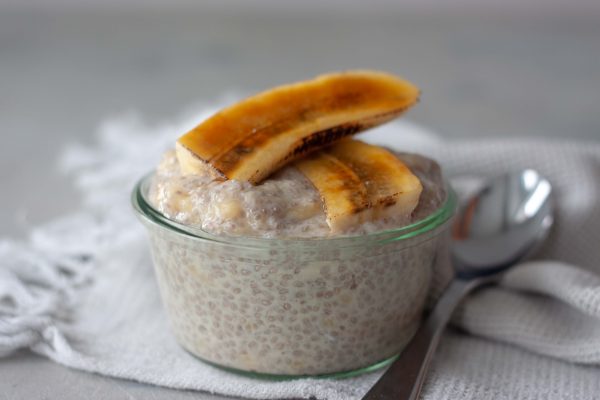 Use a thicker vanilla nut milk for creamiest texture. You can also use a sweetened coconut milk beverage and coconut cream. If using unsweetened milk add vanilla and a little sweetener to taste. Homemade recipe linked above, or use a nut based or coconut milk from your favorite juice shop (Juice So Good Cashew Bliss), or as mentioned above Ripple plantbased milk in Vanilla is a great option for protein and I think it actually tastes like those old school pudding cups I had as a child.

I have so many chia seeds. Thanks for reminding me I need to start putting them to use!!
AZ@…And A Dash of Cinnamon recently posted…Cinnamon Roll Protein Popcorn [Clean, Vegan, GF]

A great way and reason to use them!

My son would love to have those bananas! This looks easy and delish have a fantastic week
Deborah Brooks recently posted…Mu Shu Vegetables with Tofu Meatless Monday

I’m not sure I could see anyone not loving the bananas, well I guess unless they hated bananas. 😉

Ill take the bananas on top! I don’t care for Chia pudding but I love me some bananas.

The bananas make it for me! I hear you, my youngest isn’t a big fan of the texture. Blending it she likes better but still isn’t her favorite.

Hi Sarah! How much chia for this recipe?

Sorry it was updated right away when I saw it didn’t catch that line, it’s 3 TBSP. It should be showing up if you refresh your screen. If not I will check again but it shows up in all of my browsers.

I see the chia amount now! Thanks ☺️

am I the only one that doesnt see the chia seed amount?

Sorry it was updated right away when I saw it didn’t catch that line, it’s 3 TBSP. It should be showing up if you refresh your screen. If not I will check again but it shows up in all of my browsers.

I have a bunch of chia seeds, so I definitely need to start using em’ up more! This would be a great way to start! :D! I love the idea of topping it with caramelized bananas!

Thank you Farrah! Chia pudding (blended or like this), overnight oats, and in smoothies are some of my favorite ways to use chia seeds.